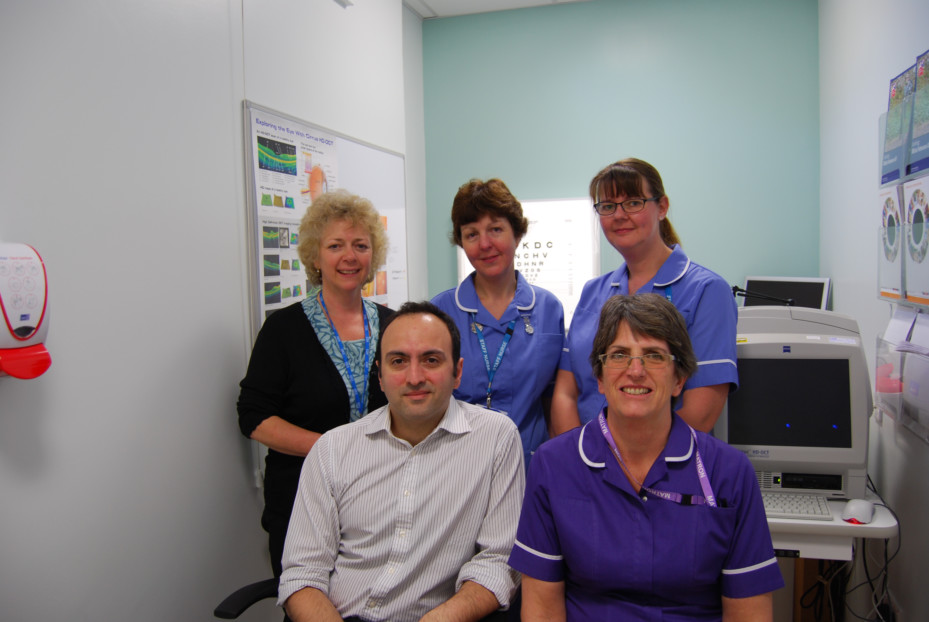 Deteriorating eyesight is a problem for many as years roll on but Bexhill Hospital has a new specialist unit to cope with this ever-increasing problem.

Age related Macular degeneration is now being treated at the Dowling ward which opened in January to deal with need in the area.

Patients are initially assessed and treated at either Eastbourne District General or the Conquest Hospital then come to Bexhill for ongoing appointments.

Some 700 patients were being treated for this condition across the Trust and it had become difficult to keep up so the unit was created to ensure ongoing safety and shorter waiting times.

Age-Related Macular Degeneration is the most common form of central vision loss in the UK. It is a painless disorder that affects the retina.

The treatment given at Bexhill Hospital is a series of injections to hold back wear and tear – obviously this is a traumatic prospect for some but the warm and comfortable atmosphere of the ward which is run by Matron Beverley Attridge does much to dispel worries and concerns.

Patients will first have had their vision tested in Eastbourne or Hastings, scanned to assess ocular coherance tomography, and then examined by an optometrist trained in Macular degeneration. If they are right for this treatment then they receive the initial ‘loading’ dose then continue injections at Bexhill every few months indefinitely to stabilise vision. The team on the Dowling Ward deals with 40 patients every day.

Beverley said: “As soon as you come in the door here it is relaxed. A lot of people say it does not seem busy. They breathe a deep breath when they come in and they know it is quiet and peaceful here. And if you are going to have an injection in the eye you want to be relaxed. Big hospitals are buzzing and busy – and sometimes there is nowhere to sit – but we can accommodate people here.”

This is the first time Beverley has been a matron and she finds her role “satisfying” having been involved since the start.

She and Principle Optometrist Sarah Canning have just won a monthly award in recognition for their hard work and effort in setting up the service in Bexhill. Sue Allen, Head of Nursing and Governance Head and Neck Surgical Specialties, said, “Beverley and Sarah spent many months planning the Age Related Macular Follow Up Service relocation and worked tirelessly to ensure the move went to plan. This required employing a new team and both Beverley and Sarah have been instrumental in hosting and supporting this new team with additional training and team building sessions.”

“There have been many difficulties to overcome but both have remained positive and driven in their belief that the relocation of this service would be delivered on time and to a high standard to the benefit of the patients and staff working in this new unit. They should both be congratulated on their efforts and going that extra mile.”

The ward is named after former Observer deputy editor John Dowling, and his wife Ann, who fundraised tirelessly with the League of Friends of Bexhill Hospital.

John praised the “wonderfully enthusiastic and committed team” and said: “the unit is the product of partnership working between the Trust and the League.

The Trust undertook the conversion of the redundant former radiography storage room and the League funded the equipping of the unit at a cost of £180,000. “The League of Friends was delighted to have the opportunity to help save the sight of so many people.

“When the Trust sought ideas for naming the unit, our chairman Stuart Earl consulted the league committee without telling either Ann or me. When the committee was offered a site visit before its committee meeting last July the pair of us were totally unprepared for what was to come.

“Sue Allen, the Trust’s Head of Nursing and Governance, Head and Neck Surgical Specialties, invited everyone to sit in Outpatients’ while she made an ‘announcement.’ My function since 1966 has been to publicise the league so I sat there, notebook and pencil in hand wondering what was to come…

“This is a joint honour. Ann reckons she ‘married into’ the job in 1969. She served as secretary to the Garden Party Committee for many years, taking over as garden party organiser when Bill Sansom died and doing that for some years. She became league secretary when she retired from work in 2010.

“The pair of us nearly fell off our chairs in surprise at the announcement! Now the initial embarrassment has passed we are delighted that a unit bearing our name is doing such good work and grateful to our committee colleagues for their kind gesture.”